Premiering today, May 19, 2021, at 1 p.m.! As the family historian, you have amassed information and records that will one day pass to the next family historian. How do you share your findings with others? How to engage young family members involved with all your hard research may be another story. Education staff members Missy McNatt and Dorothy Dougherty will demonstrate fun and engaging ways to connect research to your family, including younger family members. This lecture will highlight activities related to our most popular genealogy records, such as Immigrant Ship Arrivals, U.S. Census Records, Naturalization records, and Military and Pension files. The presenters will also demonstrate new ways to share your research finds online, using social media tools.

While we normally think of naturalization as a two step process whereby the alien first declares his intent to become a citizen and then petitions for naturalization, there were exceptions to that procedure.

For example, from 1824 to 1906, aliens who came to the U.S. while under age 18 could effectively declare their intent to become a citizen at the same time they filed their petition for naturalization once they had reached age 21 or more and had lived in the U.S. for five years (three of which as a minor). Let the law speak for itself: 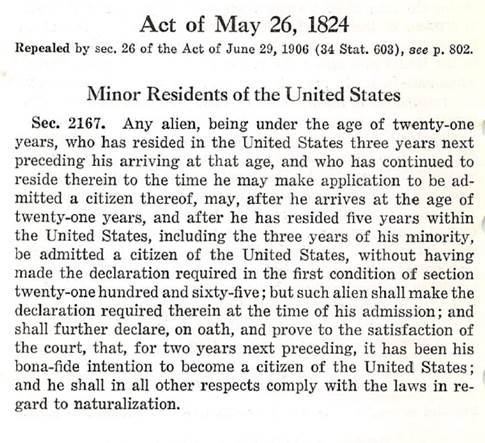 So, to summarize: the alien still had to meet the five year requirement for residency, and three years of that had to be while he was a minor.

Many courts used specific forms for these cases that combined declaration of intent language and petition language in one document, and they made sure to include the word “minor.”  Some may say the applicant “arrived as a minor,” while others will have the words “Minor Naturalization” emblazoned across the title or as a watermark.

Countdown to Release of the 1950 Census!